Evaluation of social protection legislation, expenditure and programme impact under discussion in the third webinar of a series on South Asia 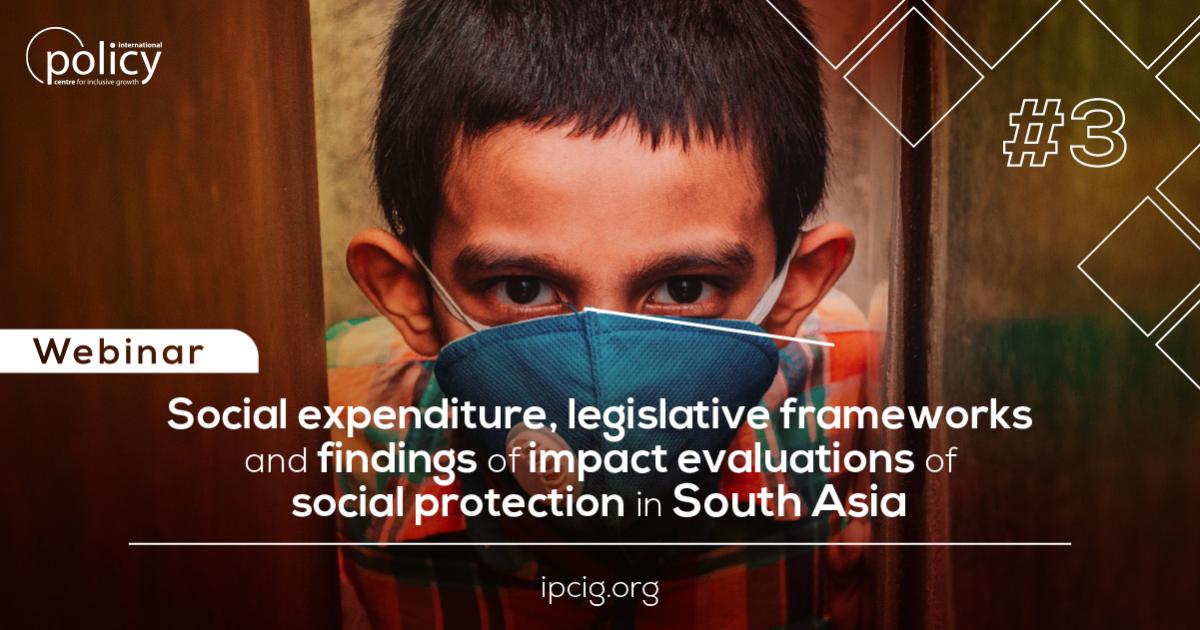 On 23 July, the IPC-IG, together with UNICEF’s Regional Office for South Asia (ROSA), held a webinar titled “Social expenditure, legislative frameworks and findings of impact evaluations of social protection in South Asia”. The main findings and takeaways of three papers were presented by Carolina Bloch (Researcher at the IPC-IG), Luca Lazzarini (Senior specialist scholarship holder at the Institute for Applied Economic Research—Ipea) and Yannick Markhof (Consultant at the IPC-IG). The session was moderated by Usha Mishra, Chief of Social Policy, Evidence and Evaluation at UNICEF.

The session began with Lazzarini, who presented an overview of social protection regulation in South Asia from both national and international perspectives, providing an analysis focusing exclusively on legal coverage regarding children’s welfare. He also provided an overview of national constitutions and statutory legal frameworks for social protection, child-focused statutory legislation and programmes, illustrating that the most typical approach in the region is the regulation of single issues (for example, child protection, protection for elderly people, protection for people with disabilities) through individual pieces of legislation—a method that, over time, has generated a considerable amount of national-level legislation.

Carolina Bloch, in turn, summarised how governments in South Asia allocate resources to health, education and social assistance, presenting a comparative study of eight countries. Research shows that South Asia has an average regional spending below 1 per cent of gross domestic product (GDP) when it comes to health expenditures, compared to a global average of 5.8 per cent. The study also shows an enormous heterogeneity within the region, as demonstrated by government participation in health financing. She remarked that the education sector receives comparatively more public resources than health and social assistance (except for Maldives). Nevertheless, around 11 million children of primary school age are out of school. Research further shows that regional spending is at 3.4 per cent of GDP, compared to a global average of 4.8 per cent. Spending on social assistance in the region represents 0.9 per cent of GDP (compared to a world average of 1.5 per cent). Even though many South Asian countries have strengthened their commitment to improve social protection systems, overall coverage remains low.

The last presentation was delivered by Yannick Markhof, who presented studies linking social protection programmes in South Asia with child poverty, economic growth and improvement in human development. The study analysed a total of 16 programmes in six countries and 37 studies were included in the review, which assessed impacts on five broad categories of indicators: poverty and finances, labour market, education, nutrition and health, and gender.

This webinar is part of a six-session series titled “Social Protection in South Asia - the landscape before COVID-19, a snapshot into responses to the crisis and the paths ahead”. You can see the highlights of the session in this live tweeting sequence. The recordings are available here.